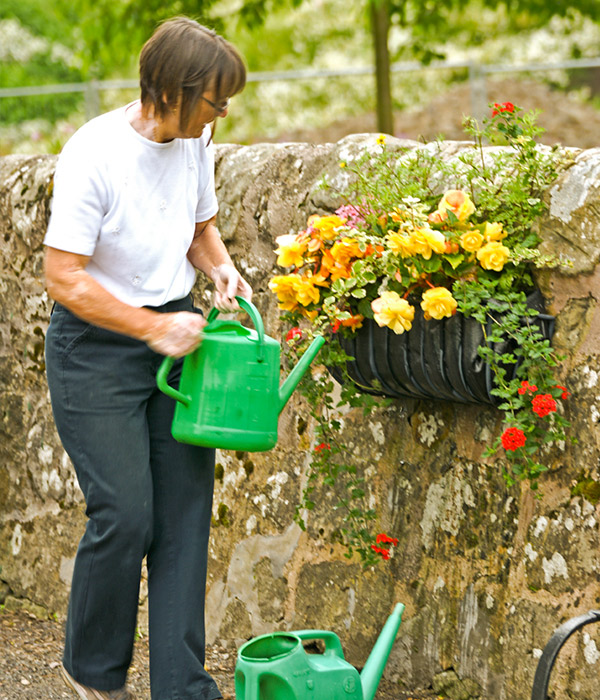 The village of Scotlandwell lies to the east of Loch Leven, approximately 4 miles east of Kinross. It is one of the great historic sites of Kinross-shire. Named Fons Scotiae by the Romans who passed this way nearly 2,000 years ago, the curative waters that bubble up through the sandy ground were used by Red Friars who maintained a hospital in the village between 1250 and 1587. Thousands of pilgrims came to Scotlandwell to take the water, the most famous perhaps being King Robert the Bruce who is alleged to have found a cure for leprosy here.

Scotlandwell in Bloom was originally formed in 1990 to enable Scotlandwell the village to participate in the local Kinross-shire Civic Trust competition, which it has won on several occasions. The group has also enjoyed many successes in Take a Pride in Perth & Kinross competitions.

The group aims to achieve continuous sustainable environmental improvement of our village for locals and visitors alike. Standards within the village have risen dramatically over the years. Scotlandwell in Bloom has also undertaken activities outwith the immediate village envelope, including developing flower beds adjacent to Portmoak Parish Church and maintaining the nursery and alpine sinks at Portmoak Primary School.

The improved standards are maintained via an annual planned programme of activities. The winter months saw the various tubs and in bloom areas coloured with winter flowering pansies and primulas, followed by a colourful mass of spring flowering bulbs. By working closely with other local groups, including the Gala Committee, Community Woodland Group and Portmoak Festival we have aimed to use our activities to maximum benefit for the community.

The walled garden adjacent to the historic Well and Wash House changed ownership in late 2004 and the new owners offered Scotlandwell in Bloom the opportunity to get involved in improving the area. Volunteers helped to prepare the area for planting shrubs, using weed suppressing fabrics and bark, both donated by local residents. In 2009, a submission was made to the Take A Pride in Perth & Kinross Association for the conservation & re-use of the Wash House. This was successful and the project has restored the building, securing it for the future by the community.

To find out more about Scotlandwell in Bloom or to get involved please e-mail info@prideinperthshire.co.uk